Ear Infections Made Me a Chiropractor 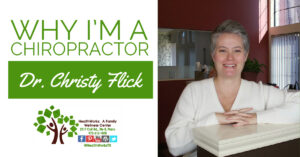 In the summer of 1997, I had my first son Taylor and when Taylor was born, he was perfection. He had, you know, chubby little hands, he had the blondest hair, the bluest eyes, and was just such a sweet little infant. But when Taylor was getting to be around six months old, he started having ear infections just one after another, after another. And this was so concerning to us because we had had other family members who had also had chronic ear infections that had damaged hearing and created all kinds of issues. So, this wasn’t just a small problem for us. This was a big, scary problem for us. And at the time we were in the military and seeing military doctors, so we’d take Taylor, he’d have a fever, he’d be crying. We take him and we’d get his ear checked. He had an ear infection and he’d be given an antibiotic. And this process went again and again and again and again, and over time, our fear began to build more and more because there just seemed to be no answer to this problem.

And so, one day, I started just doing a little bit of research and reading, and I don’t know if you all remember 1997, but that’s when the internet made funny noises when you tried to access it. So that’s what I did. I fired up the internet, and I went on that search engine that none of us knew if it was Google or Goggle at that time. And I started doing some research about kids and ear infections. And one of the first articles that I read, was relating chiropractic to the resolution of chronic ear infections for children. And this was something that was totally new to me. I never really heard about chiropractic for anything other than spinal pain. And so, but at that point, what did we have to lose? We didn’t have anything to lose because what we had been doing for so long, hadn’t been working. And meanwhile, our son was on more antibiotics and more antibiotics, which is certainly not good for his system and we’re not solving the problem. So, we contacted our local chiropractor. She was a new graduate from Parker University and we took a Taylor in and he had a misalignment at Atlas C1. He had his first adjustment. And after that day, he didn’t have another single ear infection, not one. And you can do the math. He was born in 1997. It’s been a few years. So it was, it was miraculous for us. We had a solution to a problem, a health problem that, you know, some people might think that a minor problem, but it didn’t feel minor to us at the time. And we finally had a solution that actually worked and had, what I found out later, tremendous benefits besides just the ear infections.

Dr. Christy Grateful to be Serving as Your Plano Chiropractor to Help our Community

And from that point forward, I just became so interested in what is chiropractic, how did this work, and what are other natural lifestyle measures that we could take. And so long story short, I became a chiropractor. And now today, in my practice here at HealthWorks in Plano, Texas, we see kiddos with ear infections all the time and have the same similar results in almost all the cases. So it’s just such a pleasure that I’ve been able to pass that on from my own son to now the children in our community. And I couldn’t be more blessed to be a chiropractor.